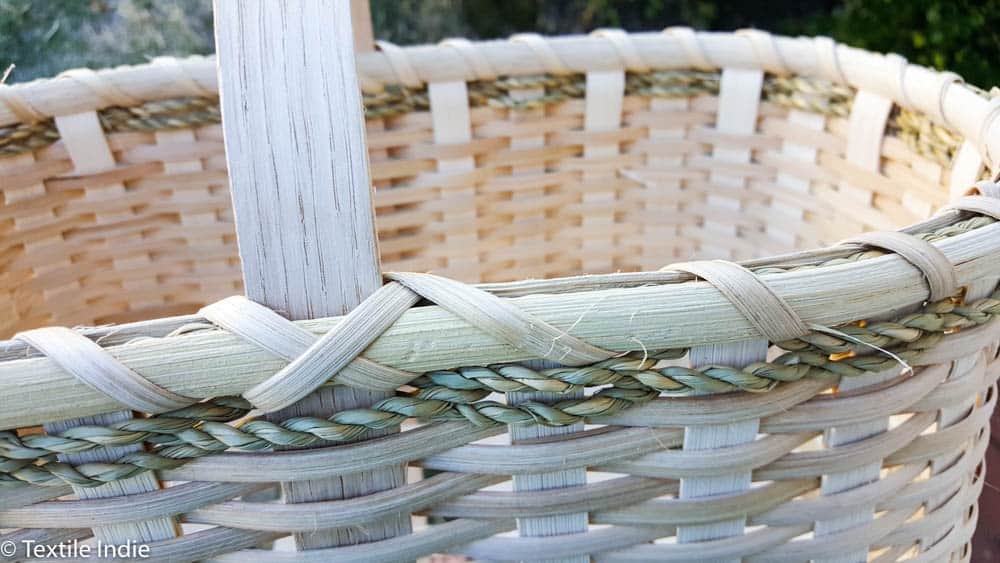 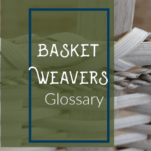 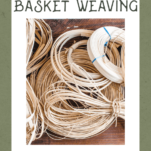 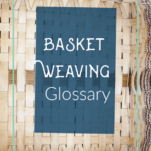 Basket weaving, like any craft, has its terminology and expressions. Learning these terms will help you understand the weaving process more fully. And, you’ll be able to decipher weaving patterns as your skills grow.

Once you have your hands on the materials, it becomes more natural to use these terms as you work and take in information.

For a complete guide to all Textile Indie’s basket weaving posts and videos, visit the main Basket Weaving Page.

What are the weaves in a basket called?

A climbing vine that is used to create reed for basket making. Often found in Indonesia.

Using rattan, the inner core of the vine is cut into lengths of different shapes to create a reed. The reed is cut into round, flat, flat-oval, half-round, or oval shapes. Reed is used in basket weaving and furniture making.

Check out the Beginners Guide to Basket Weaving Materials, where I go into more detail on basket weaving materials

Reed cut so that one side is flat and the other side has a rounded surface.

Reed cut in a cylinder.

Reed that looks like a half-moon in profile. One side is flat and the other side is rounded, more dramatically than the flat-oval reed.

Cane is made from the outer layer of the rattan vine. Cane is another material that can be used in basket weaving.

Part of a basket, used to conveniently carry the basket.

For an in-depth look at basket handles, see the Beginners Guide to Basket Handles.

A handle that has a flat bottom and curves around to create a ‘D’ shape.

A piece of wood or reed that has been formed into a ring. Hoops are used in ribbed baskets.

A twisted rope of grass.

Strips from an ash tree that are cut and thinned to be used as stakes and weavers. Used in split-ash basketry.

Strips from an oak tree that are cut and thinned to be used as stakes and weavers.

Do you want the best resources, tools, and products for fiber artists?

Every other Friday, I send an email chock full of fiber craft inspiration for you to explore.

For a complete explanation of basketry tools see, Basket Weaving Tools: What you Need to Get Started

A flat-headed awl that is used in rattan basket making to pack the weavers together. The straight-tipped packer also assists in lashing the rim, and other techniques.

A heavy metal bar used to hold stakes in place when setting up a basket base.

Consisting of a handle and a rod of metal that comes to a point at the end. Used to open spaces and create holes in reed.

These are used at different stages in the basket weaving process to hold things in place and act as a third hand.

Small fibers that stick up on rattan reed.

The pieces of reed that form the foundation of the basket. They are like the bones of the basket – creating the base and the shape.

The term stake is typically used for baskets made of flat reed. Spokes generally refers to baskets that have ribs made of thick round reed.

A piece of reed that you are currently using to weave with.

Or the pieces of reed that are woven into the walls of the basket.

Placing pieces of reed in a tub of water.

Soaking keeps the reed pliable and easier to handle as you weave so that it doesn’t crack or break.

The bottom of the basket.

A basket base that’s woven in a grid, leaving open spaces between the stakes.

How to Weave an Open Basket Base

A basket base that’s woven with added weavers between each stake to close the spaces between the stakes.

How to Weave a Closed Basket Base

Related videos on weaving a basket base:

Do you want the best resources, tools, and products for fiber artists?

Every other Friday, I send an email chock full of fiber craft inspiration for you to explore.

Twining is a technique used to hold the base in shape after all the stakes have been placed and squared up.

Its a process of weaving with a length of round reed that’s been folded in half. The loop it placed over a stake and then the two ends are crossed over in between each stake.

Twining the Basket Base

Upsetting begins to form the walls of the basket.

The process of sliding all layers of weavers towards the base to ensure they are tightly spaced.

Cut and tuck is the process of folding over stakes and cutting them around the top of a basket in preparation for the rim.

The stakes that sit in front of the top weaver get folded over the weaver creating a “lock” that holds everything in the interior of the basket.

The result is an alternating cut and tuck series around the top of the basket.

How to Set up the Rim on a Basket

The upper edge of the basket.

A joint where the ends of two pieces of reed are cut so that they meet or overlap firmly.

Trimming down the ends of a rim reed so they have less bulk when they overlap.

The reed used to do lashing.

A process of “whip stitching” a lasher around the rim to hold it in place.

How to Do Basic Lashing on a Basket Rim

Lashing is done around the rim of the basket, going around in one direction and then repeated back over the previous work in the other direction. The stitch creates a cross-stitch or ‘x’ shape around the rim.

How to Do Cross-Stitch Lashing on a Basket Rim

Crow’s feet are used in closed base baskets. The filler stakes are folded into the basket and under the base stakes to create ‘v’ shapes on the inside of the basket.

To trim a square edge down to a sloping edge.

Extra spokes added after the original set of spokes.

A braid that is woven around the handle of a basket.

To bring any two ends of material flush against each other.

A point on a basket where the rim and handle intersect – lashing or weaving is done around this point to hold it securely.

A support around which a basket is woven. Frames are used in shaped baskets.

Losing a lasher refers to hiding the the end of the reed in the rim or in the weaving.

An indentation in a push-in handle that holds the handle in the wall of the basket and prevents it from coming out.

Another term for woven.

An over-under weave done with a single weaver over an odd number of stakes.

Round or oval pieces that form the skeleton of a basket from one side of the basket to the other.

A piece of material placed between the inner and outer rim to fill the gap above the basket walls.

Stepping up is used in twill weaving. It describes the process of starting a new row one stake to the right or left of the beginning point on the previous row.

The movement of the weaver. Each time it goes behind or in front of a stake that is a stroke.

A basket that has an inner wall and an outer wall. Essentially two baskets woven into one.

Dyeing is a process of adding color to the reed by soaking it in a pot of boiling dye.

What are the weaves in a basket called?

Plain weave is done by following an over one, under one pattern of weaving.

This is a technique used to create a diagonal weave in the walls of a basket. French randing is great for using up shorter pieces of reed. It’s done by weaving the base of a basket as normal and then weaving the walls up at a forty-five degree angle.

Twining uses two pieces of round reed to crisscross around each stake in a basket. The process creates a cross between each stake.

Twill is a technique used to create a diagonal stairstep effect on the walls of a basket by weaving with an even number of stakes. There are two main types of twill a 1-2 twill and a 2-2 twill.

This twill is called a one-to-two-twill. This is when the weaver goes under one and over two around the basket and then alternates as you proceed with the rows.

This twill weave, called a two-to-two-twill, is where the weaver is going over two stakes and then under two stakes. The next row alternates that pattern so that a stair step pattern forms.

A wave adds a weaver to the sides of a basket that crosses over the working weavers creating an ‘x’ shape on the outside of the basket.

A weave brake refers to the point when you end one row, or weaver and begin a new row or weaver.

One row at a time weaving. It’s done by weaving all the way around, overlapping the ends, and tucking them out of sight.

Continuous weave is a technique often used in a round basket where the weaver is woven around and around until you reach the end of the weaver. You will continue adding weavers until the walls are complete.

Chase weave involves two weavers being woven at the same time. The ends of the weavers are trimmed down and woven into the basket, on the same side, so as the walls form, they are even.

When you get to the end of one or both of the weavers you add in a new length of reed just like you would for a continuous weave.

Reed darkens as it cures and ages.

Finishing the basket with a sealer to protect it from the elements and dirt.

A sealing product is used to seal the reed of a finished basket.

A mixture of products used to change the color of the basket reed to a desired hue.

Using a stain to finish a basket and change the color of the reed to appear a different shade.

For a complete guide to all Textile Indie’s basket weaving posts and videos, visit the main Basket Weaving Page. 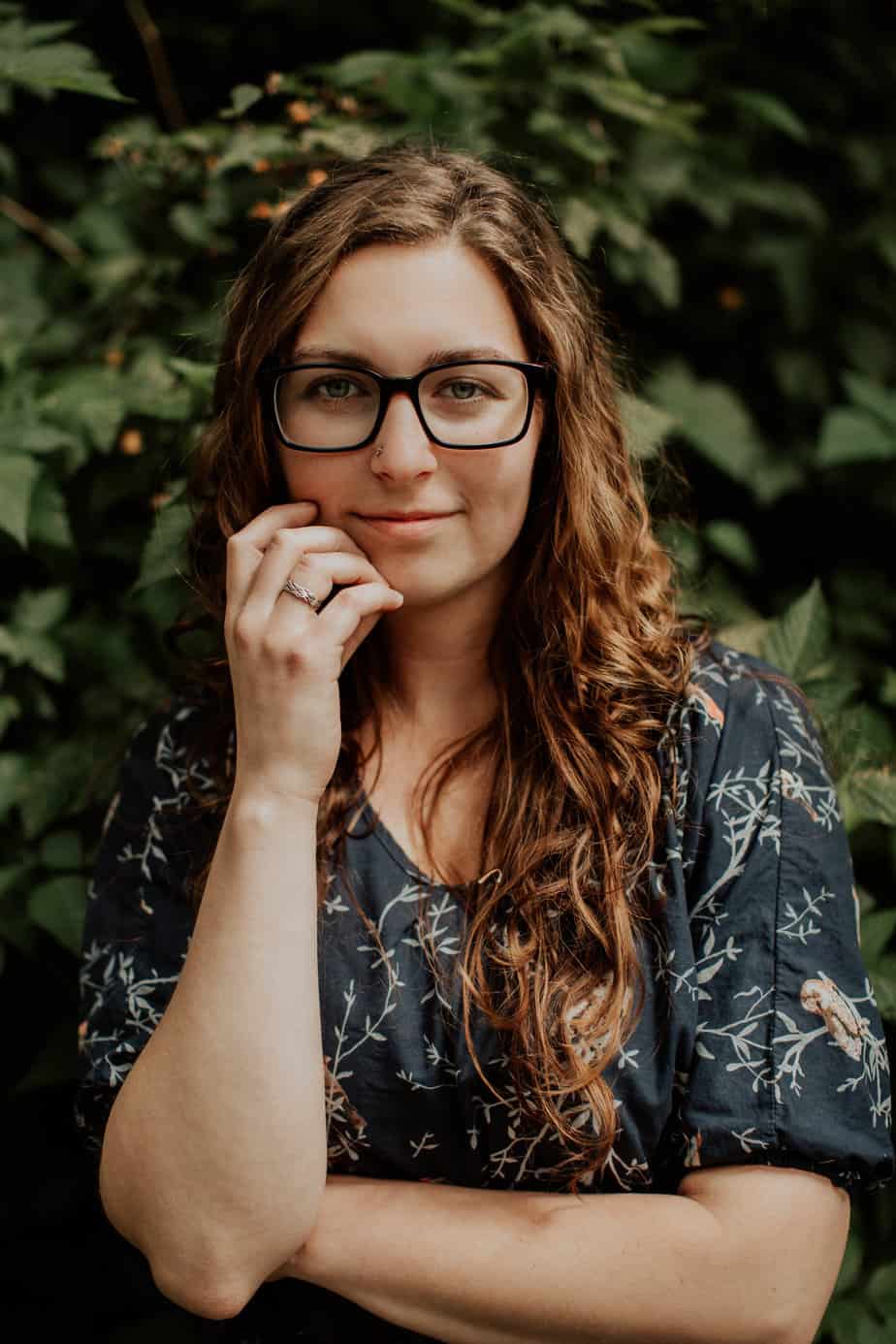 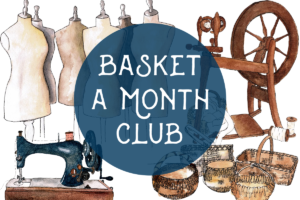