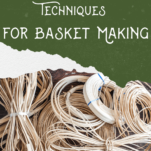 Plain weave is done by following an over one, under one pattern of weaving.

This twill called a two-to-two-twill is where the weaver is going over two stakes and then under two stakes. The next row alternates that pattern so that a stair-step pattern forms.

This twill is called a one-to-two-twill. This is when the weaver goes under one and over two around the basket and then alternates as you proceed with the rows.

Twining is used to holding the base in place once the base has been woven. See Twining the Base: Creating a Stable Basket for more on that technique.

Twining can also be used to build the walls of a basket. The cross over of the two pieces of the twining between each stake creates a twisted look in the sides of the basket.

Braiding can be used as a decorative technique. It’s typically more advanced and involves working with multiple weavers at the same time to create the braid.

A weave brake referrers to the point when you end one row, or weaver and begin a new row or weaver.

This is one row at a time weaving. Weave around the basket, all the way around, and then overlap the ends so that they are tucked away out of sight.

The continuous weave is a technique often used in a round basket where the weaver is woven around and around until you reach the end and then you add in a new weaver.

Chase weave involves two weavers being woven at the same time. The ends of the weavers are trimmed down and woven into the basket, on the same side, so as the walls form, they are even. When you get to the end of one or both of the weavers you add in a new length of reed just like you would for a continuous weave.

Adding a weaver into the sides of a basket that crosses over the working weavers creating an ‘x’ shape, called a wave on the outside of the basket.

This is a technique used to create a diagonal weave in the walls of a basket. Great for using up shorter pieces of reed. Weave the base of a basket as normal and then weave the walls up at a forty-five degree angle.