How to Set Up the Rim on a Basket

You are here: Home / Basket Weaving / How to Set Up the Rim on a Basket 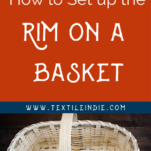 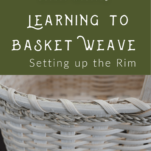 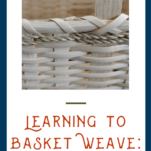 After weaving a basket and achieving the wall height you want you will be proceeding with creating the rim for the basket.

You will need a few tools to create your closed basket base. The following are the basics to start with.

Basket Makers Catalog offers a number of different versions of these.

I am using a 3/4″ flat reed for the basket bases demonstrated in the photos below. The width of the reed you start with will depend on what size or style of basket you are weaving.

I order reed from The Basket Makers Catalog, an online basket makers resource and supplier.

Make sure everything is damp.

The stakes will be sticking up at this point.

Looking at the basket from the outside there will be some stakes in front of the last weaver and some that are behind. Using the basket shears cut the stakes that sit behind the top weaver.

These are the basket shears that I use:

Those that are in front will get folded over and tucked into the walls of the inside of the basket.

To do this fold one of the stakes over that is in front of the last weaver.

Using your basket shears cut the stake so that its length reaches down to the length of the third or fifth row down inside the basket.

Now using your straight tipped packer place it down behind the weavers against the stake and gently tuck the folded part of the stake into the space created. Do this process for all in-front stakes.

Using a flat oval reed that is double the size of your last weaver (typically rims run between 1/2” and 1”) whittle down the end so that there is a two-inch length of the reed that is half as thick as the rest. This is called scarfing.

Putting the outer rim on the basket

The oval side of the reed should be facing out, the flat side rests against the basket.

Note: I show metal clamps in a few photos below. I suggest using plastic clamps like those listed above. The metal clamps leave grooves in the reed which don’t look nice.

When you get to the start of the rim cut it so that it overlaps the two inch whittled section.

I like to cut it and then trim the corners of the reed down a little so that it’s rounded, not just a raw straight edge.

Follow the same steps, place a rim reed inside the basket.

Don’t put the end of this part of the rim in the same place as the outer rim join. I usually put them on opposite ends. Clamp so that the clamps span both the rim reeds and the basket body between.

The inner rim should be placed in the basket so that the rounded side of the reed is facing out and the flat side is against the basket.

Inserting seagrass in the rim

The next step after you’ve set up your rim is to lash it.

With the lashing reed go ahead and use your chosen technique to lash the rim.